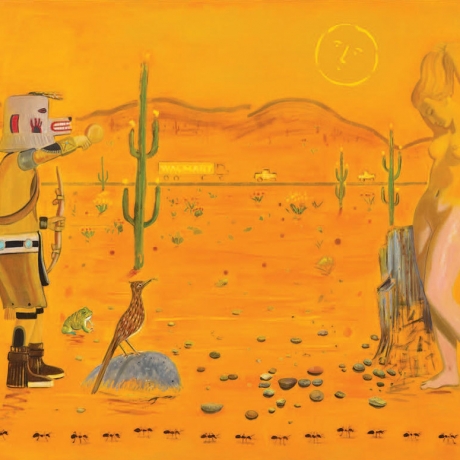 In the years since Guerrero’s trip, this smiley face has appeared in several of his paintings, including two that were on display in the artist’s first exhibition with Kayne Griffin Corcoran. Canyon de Chelly, Arizona (all works cited, 2019), a nine-foot-tall painting of the rock arrangement, revisits the artist’s 1989 gesture with a kind of ironic reverence—pitting the painting’s grand size against the small, temporary, and informal gathering of stones. The smiley face is easier to miss in A Desert Road, but it’s there, on the ground, pictured between a winsome, classically rendered European nude and a kachina (wearing a mask representing a bear) locked in a de Chirico–esque High Noon standoff. Blooming saguaro, a frog, a roadrunner, a Walmart truck, and a line of black ants also populate the scene of this supremely weird and satisfying painting. 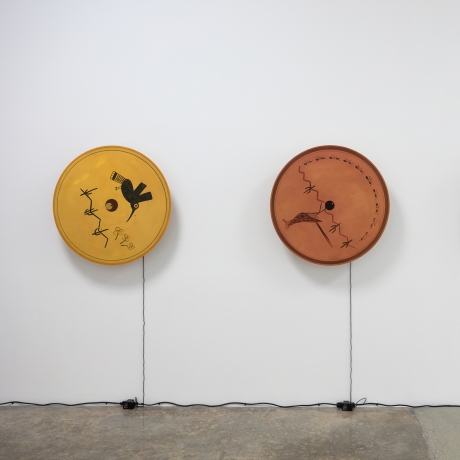 Duchamp in the Desert: the Surrealist Synthesis of Raul Guerrero

In a series of spinning circular paintings inspired by Marcel Duchamp’s ‘Rotoreliefs’ (1935/1953), Guerrero activates symbols from the prehistoric Hohokam and Mimbres societies, who once lived in portions of the Sonoran Desert. Inverting the Duchampian attempt to enhance the two-dimensional into three, Guerrero’s spinning works distil two entities into one. In Mimbres: Road Runner and Coyote and Mimbres: Tortoise and Hare, each symbol is reliant on the other for meaning: the tortoise is only slow because the hare is fast. As the paintings spin, the hunter is no longer discernible from the hunted, the beginning indistinguishable from the end.